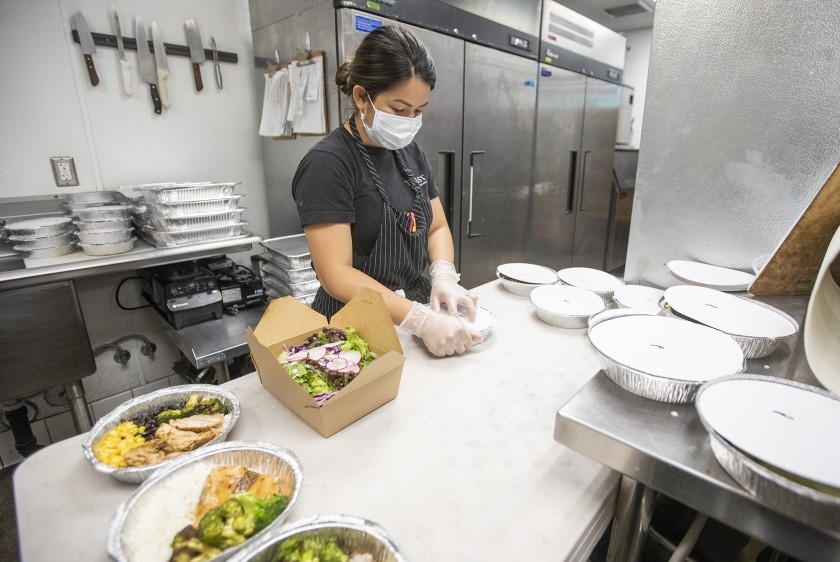 Holley Sao, kitchen manager for Toast Kitchen + Bakery in Costa Mesa, prepares meals for Delivering with Dignity on Wednesday. One year in, the collaboration of donors, volunteers, assistance agencies and local restaurants has delivered 81,000 hot meals to people in need.

As Orange County entered the long stretch of the coronavirus pandemic last summer, a contingent of nonprofit organizations, local restaurants, philanthropists and volunteers teamed up to provide fresh, hot meals to residents whose food options were scarce.

Delivering with Dignity Orange County created a framework where donors raised funds to pay a modest $6-per-meal price to independent restaurants, who took turns boxing up goods for an army of volunteer delivery drivers.

The meals went to clients of local assistance agencies who were at high risk for coronavirus and confined to their homes, did not qualify for other food programs and who otherwise had no support system or means of procuring food. 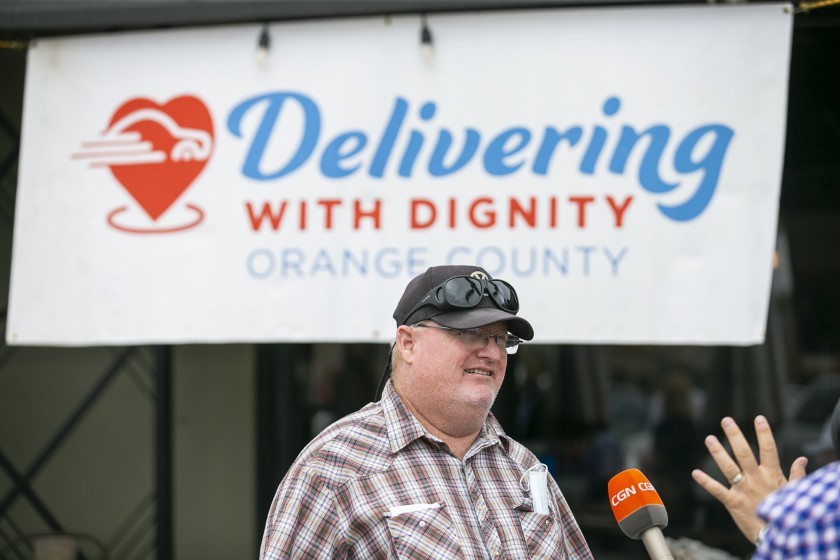 Among them was local resident Jeffrey Hull, a client of the Costa Mesa nonprofit Project Independence, which helps adults with disabilities find jobs and live on their own. Last year found Hull often stuck inside his apartment with limited transportation and means of getting fresh meals.

“I mainly stayed inside the house,” Hull said of his pandemic routine, alleviated by Delivering with Dignity. “I’ve gotten meals delivered before — I think it’s a fantastic organization.”

“The pandemic clobbered a lot of us and our ability to get out,” he said. “A lot of our clients are isolated, so this was a godsend.” 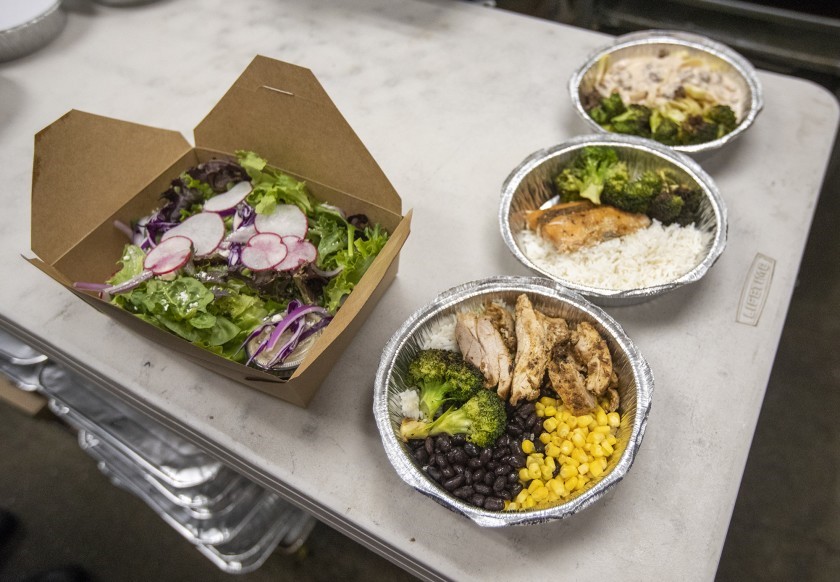 Although the collaboration first formed as a stop-gap measure during a time of crisis, one year later, its participants are realizing the span and scope of what they created is much deeper than anyone anticipated.

Delivering with Dignity O.C. founders held a small ceremony Wednesday at Costa Mesa’s Toast Kitchen + Bakery — where the very first meals were prepared June 24, 2020 — to recognize the village of people who’ve contributed to the effort.

In the course of one year, the program has raised around $646,000 and has so far provided 81,000 daily meals to families and individuals in Anaheim, Santa Ana, Garden Grove, Costa Mesa, Fountain Valley and other local communities.

“As long as the need is out there, we want to do everything we can,” said Daniel Kim, founder of the nonprofit Dragon Kim Foundation, who saw a similar program operating in Las Vegas and brought it to Orange County. 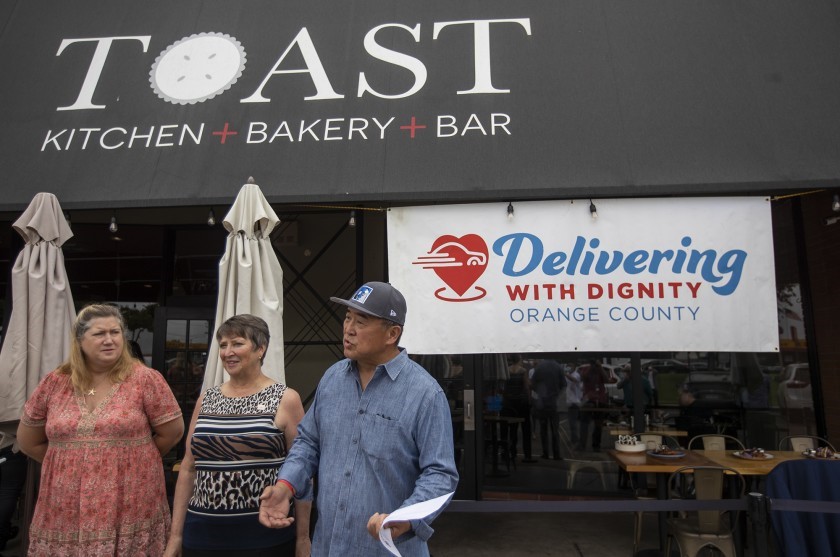 “We’re very proud of the effect we’ve had in the community. It wouldn’t be possible without this collaboration,” he continued. “It’s amazing what you can get done when you have an objective and put aside the egos.”

And what a collaboration it’s been.

One driver, Naomi Takahata, personally delivered 6,615 meals in a one-year period, Kim said. Others came through company-wide volunteer efforts, like the Santa Ana branch of Medtronic, which assembled a small team that delivered another 50 meals.

“Some of the employees have taken it a step further and delivered on their own time,” said Medtronic team leader Ed Martinez. “[That’s] what we want, to have Delivering with Dignity have a bigger net out there into the community.”

Delivering with Dignity also allowed eight independent restaurants to preserve at least 30 full-time positions at a time when eateries were forced to implement massive layoffs to survive.

Karen Williams, president and chief executive of 211 OC, a nonprofit that connects vulnerable people with vital social services and resources, said while some aspects of the program may shift as the pandemic recedes and restaurants become fully operational, the need for hot meals is likely to remain.

“If you’re living in a motel, or you’re renting a room from somebody or living in a garage, you may not have kitchen access,” she said. “So, being able to have prepared food makes a big difference.”

As for Kim, he’s motivated to keep the program going as long as the need is out there.

“The day we stop is when the need goes away,” he said.